Did you now that? It used to be that March was just the Month-O-Crochet in the USA. Ravelry stepped in to make sure all the hookers (of yarn!) got to play this month. They are throwing a party with chat, games, and CALs. 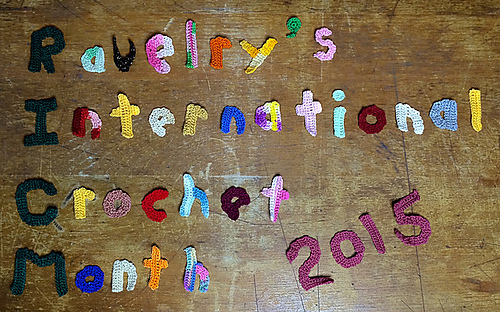 I’ve been a bit busy with our Revive-A-Vinatge challenge but I did find some time to go play in that sandbox too.

• A scavenger hunt that I cannot keep up with. Those people are beasts.

• The Ultimate Hooking Championship – as of this writing the time to beat is 20 minutes. How fast are you?

• The Mystery Crochet A Long… which is the one I’m doing. The clues started on March 2nd. We’re up to clue 11 as of today. I’ve posted pics of my progress below which you don’t want to see.

Why would you want to go down there?

The MCAL preview said we needed three colors and the third color would not be used much at all. So I went diving into my stash and came up with: Love Pima Tencel and I still feel a little sad when I remember that its been discontinued. Why Cascade? Why?

The designer said she used worsted yarn and a size D hook (3.25 mm). She also said we would need a small amount of fiber fill.  So I thought “Ah ha! This will be amigurumi!”.

Clues 1 through 5 took me this far:

At around this point we in the MCAL had no clue what it would be. Speculation was wild and silly. At one point we all thought we were making some kind of funny looking teapot. Now, we are thinking snail…. The clues come out every day and finish on March 20th. They are tiny itty-bitty clues so its easy to catch up/keep up. Join in! Its a daily ten minute break from that vintage project that you are all working on.

You are making me a vintage something-something right?  Next prize goes out next Friday.  It could be yours ya know!

Yes. It is bad for my condition and it caused me to have a startituptis setback. As you can see, lol

Looks like a hat and a shoe to me!

Maybe you’re right! I need to get today’s clue done. Who knows, maybe it will change again, lol.