Here is a color theory post about the usefulness of thinking in terms of shades of gray that will not devolve into uncomfortable and awkward jokes about that movie/book/internet meme on how gorgeous, wealthy, and brilliant men are always looking for pretty, naive young women to shackle. Its about color and yarn and picking colors in yarn. And no shackling.

I’ve written about color theory before…

The Tyranny of Color and How to Pick One

How to Use That Color Wheel

and I probably will again. Its a deep and fascinating subject. Every time I delve into color theory I learn something new, something that opens my eyes to a whole new way of seeing and using color. I love it. I love all the colors. I’d be hard pressed to pick a favorite and there are none that I would refuse to consider. I’m an equal opportunity colorist!

Which is why I’m enjoying making this Hue Shift Afghan. It uses ten colors, all in combination with each other. Here is how mine looks so far…

and here is how it will look when its all grown up. 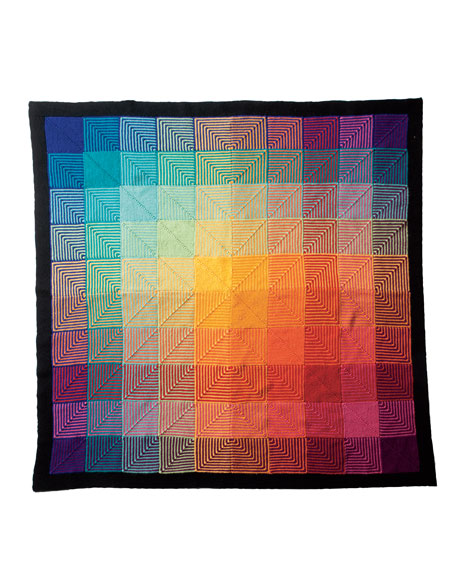 (The pattern is from KnitPicks. You can buy it separately or with a “kit” of yarn to make it. The kit is in Brava sport weight and I’m really liking this yarn. For the price, $2.99 a skein or $34.89 for the kit, its fantastic. I’ve liked all the KnitPicks yarn I’ve ever tried which is why shortly after starting this project I became an affiliate, aka online sales person, for KnitPicks. I like their stuff. I happily recommend it.)

When people look at my in-progress blanket, they usually tell me which squares they like and which they don’t. Most of the time they don’t know why, they can’t explain what it is, but “there is something about those two colors and they don’t work together.” I know why. Its the colors’ value. Rather its those two colors’ values relative to each other.

Now the Hue Shift Afghan is not about individual squares, its about the whole thing and getting the big effect. But let’s take a look at it square-by-square and talk about color value.

Every color has a value. Every color also has a hue and that is not the same thing. A color’s hue is determined by where it sits on the red-orange-yellow-green-blue-indigo-violet spectrum, also known as the ROYGBIV spectrum.

So when you are trying to find an orange-y red or a yellow-y green, your thinking about hue. Value is something different. A color’s value is determined by where it sits on the white-black spectrum also knows as the gray scale.

The value is a measurement of the brightness of a colour. – from Colors on the Web

Yes, value is a measure of a color’s brightness. It says so in every book on color theory. That’s not a very useful definition for me. I think of it it like this:

Color value = how it looks in a black/white photograph.

Let’s go back to the Hue Shift Afghan. Take a close look at the bottom right square. How do you feel about that one? That deep blue (Celestial) and plum (Fairy Tale) are exactly the same on the gray scale. They are both a very dark gray which is why we call would call them dark colors or dark shades. Some people like deep rich colors together and some don’t. Look at one more color set because I had fun making these up. Three of these squares combine colors with moderate value differences: the two on the left and the top right. Compare them to the top center (almost no difference) and to the bottom right (high difference).

What kind of combo’s do you like? There is no wrong answer. I have noticed people tend to have habits. Some like to pair up colors that have high value difference. Those tend to photograph better by the way and so you see them more often in magazines and such. Some people favor colors that are all the same value. They might think of them as “colors that don’t clash”. If you’re planning to combine many colors, say four or more, staying in the same color value is a safe way to go. Pick as many colors as you like, keep them all in the same value range, and you can decorate an entire living room.

Using This Trick at The Yarn Store

So the next time you are at the yarn store yarn and can’t decide which to buy (because sadly you can’t buy them all) start taking pictures of yarn in back and white. I’m sure your phone can do that. Even my crappy, out-dated phone can do that. (FYI, I hate my phone, and all other phones, and will be hanging on to this crappy, out-dated phone for as long as possible because I resent spending money on things I hate.)

Here are the last two colors that haven’t made it into the Hue Shift Afghan (yet). The light green (Alfalfa) and light yellow (Canary) have the same value. If you’re looking for that in a set of colors, these two might work for you.

And that’s my quick and dirty study of color value. Hope that was useful!

Learning to Use a Knit Sheath – Part 1
Hooray Because I Can Get Back to My Knitting!
Jenn’s Recs – Sherwin-Williams Chip It...

Great blog! I love colorwork but always have the worst time trying to pick the colors. I once bought 68 colors of Knit Picks Palette for a vest that required 6 or 7 colors! I.just couldn’t decide what I liked or what would look good. Looking at your examples above, it seems I like the squares knit with same values on the lighter side of the gray scale.

I would say “that’s awful” but Palette is a nice yarn and I’d love to have 60+ colors of it around!

But seriously, I’m glad this was helpful. Knitting/crocheting is an investment of time. Picking the right colors means your investment is much more likely to pay off and anything I can do to help make that happen is good.

This was most interesting. Thanks so much.

You are very welcome. I could, and have, spent whole days thinking about color. For me its a fascination.

This was probably one of the most helpful blogs I have read! Your explanations are so clear and having the gray-scale pictures right there to compare made the light bulb come on! My one complaint was that you had to end today’s blog…you left me wanting more! Thanks for this.

That’s a very nice complement! Thanks.

Color theory can be complicated because there is so much to it. I love to write about color but I hold myself back. Wouldn’t want to be too lecture-y and dull! So this means a lot. I wanted to hit just the right note here today. 🙂

I would have said I wanted to get just the right shade of meaning! Or is that comment tinted with sarcasm? Color is something wonderful. Thanks for the post. Your afghan is getting to be more beautiful every time. It just proves what a colorful person you are.

Ah HA! Color theory puns makes you the winner of the comments section!

I have trouble with gray. Most of the time it looks on the green side to me. I have a beautifully made shawl that I hesitate to wear because while it looks light green to me I have been assured that it is actually grey. So I just toss it on and wear with my usual assurance.
Thanks for all the tips. This is a fun way to learn.

That is interesting but not completely uncommon. There is some debate among physicist/math types about gray. Some would say gray is not a color at all. The truth is human eyes have some trouble seeing gray and people report seeing blue-ish or green-ish tints when they look at gray. If a gray looks green to you, and people tell you its not, then you may need to deliberately go with a blue-tinted gray to cancel the effect of how your eye perceives the color.

Just some random thoughts there. 🙂 Glad you liked the post!

I have often wondered if we all see color equally, I wonder if our own eye color affects color or is it some other biological factor at play? How can one measure the exact color, intensity, hue, value a given color has to the eye of the beholder? Not trying to be argumentative or anything here, just curious. I have enjoyed this article. My house is painted gray and I tried to be very careful to pick a gray that was not too green or too blue. And yet, my daughter insists our house is blue……

Interesting! What about other color discrepancies? We seem to have a never-ending debate at our house. It used to be a ratty old chore coat which I always called “my brown coat” until the kids started insisting it was green! (I’ve never been glad to get too fat for a garment before or since!) Seems like we skip gray and always end up in the brown/green debate. Comments?

Maybe your old coat is neutral?

Very cool! That explains why I like some of the combos in mine better than others I think. (I only have the first column down, but you know 9 months pregnant and I’ve had a horrible upper respiratory infection for the last week…)

Oh noes! I admit I noticed you weren’t around much and I thought you had gone off and had that baby! Take it easy, drink water and all of that usual advice. I’ll add my own which is be as grumpy as you want. Really. When you are nine months pregnant and sick you don’t have to be nice to anyone.

Been binge watching on Netflix and not at the computer much. Slowly getting better though 🙂