After all was said and done I ended up with 500 yards (460-ish meters) of two ply yarn from the Dorset Down roving sent to me by Louet. This is the last of the products Louet sent me (back in November) and they did so with the understanding that I would do more than play with the roving. I agreed to try it out and give write an honest review. Guess I had better get that done before I dive into knitting something yummy and fanciful with it.

My Thoughts on Dorset Down

I was excited to try Dorset for no other reason than I never had before. Its a rare breed sheep with a long and colorful history. That alone was enough to peak my interest. But even putting aside my enthusiasm for all things of times gone by, I’d recommend this roving for the intermediate (and above) spinner. Its priced at $17 for 8 ounces and that’s a good deal for any quality roving.

Dorset is not much like merino roving, that old stand-by in the spinning world. Of all the wool breeds I’ve spun, I’d say its closest to Bluefaced Leicester, only loftier and less scratchy. (Sorry BFL… I’m not a fan.) Dorset does have a certain crispness when you touch it and that must be from high degree of crimp in the fiber. But there are no wool “itchies”. None at all. That’s a big plus for me.

It did come with some grass in it. I should definitely mention that.

There isn’t much vegetative matter, not by any stretch. But the roving is undyed so what is trapped in the fiber, you can see. For me its not a concern. I simply spun the roving with a towel in my lap since almost all of the grass and stuff fell out as I drafted the fibers. Every now and then a bit would slip by and get spun into the yarn. I would just flick it away with my fingers. As I said, it wasn’t a big deal. A little grass never hurt anybody. But some consumers expect their yarn/roving to be completely free of vegetative matter.  (Stay away from Noro then, lol).

How I spun It

When I spin something new, or I’m learning a new spinning technique, I always take the time to do a bit of test spinning. This would be the equivalent of swatching in knitting and crochet. I play with the roving and see how it looks spun worsted and woolen (or semi-woolen depending on how its been prepared). I try out different thicknesses and amounts of twist. Then I ply it together. That first bit of test spinning almost always turns out pretty cruddy. This time was no exception!

So after several (interrupted) hours at my S75 Louet wheel I had my 500 yards of sport weight yarn. The finished, plied yarn has about 11 twists per inch (4 per cm). I couldn’t tell you how many twists per inch were in the singles. The roving is light in color and the fibers are so fine that my eyes just could not make it out, lol.

There. Review is done. I liked it. If you’re a spinner I think you should give Dorset Down a try. You’ll probably like it too. 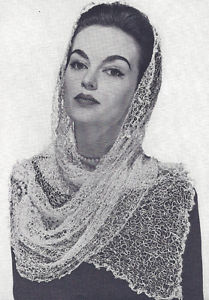 But don’t hold me to it. I might, just maybe, change my mind. Again.

Getting the Yarn I Wanted from the Roving I Had
How To Spin an Unbalanced Yarn
I’ve Managed to Trick People Into Thinking I...

6 Comments on "Finishing the Dorset"

You did the fiber justice in your spinning. I’m sure you will make it glow in the final project.

Thanks! I’m pretty excited to get started on it. My other WIPs may get pushed aside.

I’m not a spinner, but I found the article very informative and think it is a wonderful review of the roving. I think you should make a lovely shawl or something big.

[…] head-scarf-thingy out of the Dorset Down hand-spun. This is my  top priority. Its the project I can’t wait to work on. Right now it looks like […]

[…] used 500 yds of handspun Dorset Down in sportweight.  Use a good quality sportweight wool or wool blend. The pattern is flexible and […]