I have a mentor and she is a knitter. At first I thought that was all she had to teach me, stuff about knitting. It turns out she had lots more. She had wisdom. That’s what a mentor is, someone with wisdom to share.

My mentor is Elizabethh Zimmermann. You may know her as a popular designer from browsing around on ravelry. She is. But she is a lot more than that.

I talk and write about Elizabeth Zimmermann in present tense. I know that she has passed on. But I have her books, her videos, and her designs. For me she hasn’t gone anywhere.

Speaking of her designs, the Baby Surprise Jacket is the most made knit thing in ravelry. (Organize your search by “Most projects” and you’ll see it right at the top.) That little jacket has been made 23,198 times as of this writing. I should say that’s how many times its been made and posted to ravelry. I’m sure its been made by knitters who don’t bother with ravelry at all.

The Baby Surprise Jacket will surprise you. You knit them up like this: 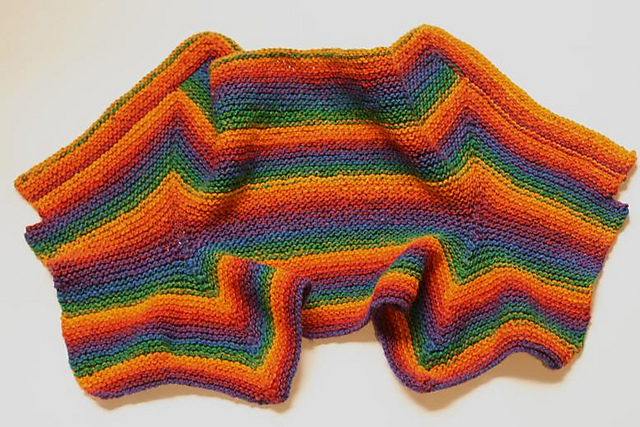 And then fold then into this: 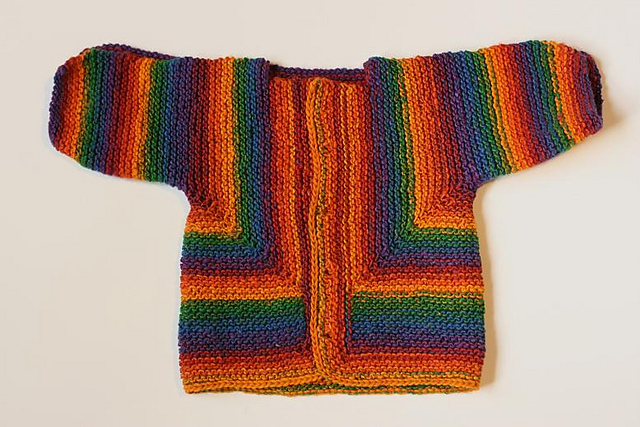 Everyone should make one. That example above is mine. A Baby Surprise Jacket will do more than make you feel clever, it will change the way you think about knitting.

I had been knitting for awhile and hadn’t paid much attention to Elizabeth Zimmermann or her fans. But one day I was knitting at Gauge (a shop in north Austin) and I met a beginning knitter. He was making a stranded knit colorwork hat and talking. This guy talked non-stop so I got to learn all about him and his hat. It was the first thing he was making that was not a washcloth and:

He actually finished that hat right in front of me and promptly pulled it on his head. It didn’t fit; it was too small for him. I don’t think he even noticed. He sat under his ill-fitting hat and beamed at me. He was so HAPPY with his knitting.

After that I went out and bought one of her books. It was Knitting Without Tears and I loved it. The knitting advice was good and the author’s attitude about knitting, life, family, and basically everything was terrific. She is very English (you can tell even from her writing) and very charming. But it not the sweet, tender kind of charming. Nope. Elizabeth Zimmermann uses charm like a weapon. Its her way of saying “I’m perfectly fine and quite happy and don’t care much at all what you think of me”.

Also she is a master at using commas. I wish I could write like that.

Then I bought another book. Next I bought those PBS videos. If you can, start with the videos. They are priceless. Its a series of four shows (I think). The first show is organized and a bit formal. By the final show Elizabeth is sitting in her studio holding forth on whatever she wants to talk about and yes, a cat wanders in. It sits on the pile of absolutely gorgeous hand knit sweaters, licks its feet, acts thoroughly annoyed that all these people are in its studio, and no ones cares. Priceless.

As far as I can make out, Elizabeth Zimmerman is responsible for numerous things about the way we all knit. She either invented these things or she advocated for them and made them popular with English-speaking knitters:

I’m sure you can find all of her books and videos and whatnot on amazon but I’m linking Schoolhouse Press. Its the publishing house her family started so they could publish Elizabeth’s work they way she wanted it without interference from editors. Its run today by her family. Her daughter, Meg Swanson, has written more books (I own a bunch of them now too) and continues to teach, design, and inspire.

You should go talk to her too. You’ll enjoy it.

I’m still not as good at knitting as those V...
How to Knit With Big Needles
Making Minis for Christmas – a free pattern

10 Comments on "Weekly Rec – Everyone Needs a Mentor"

I love Elizabeth Zimmerman too. 🙂

She is one of the good ones. I’ve had this post in me for a long time.

Thanks to you and your vintage contest, I love here too!
Thank you 🙂

Hehe! I just love to hear that. She has been a positive influence on me and my work so OF COURSE I push Elizabeth on everyone who ever touched a knitting needle.

I love her quotes 🙂 I have one as my signature on my yahoo email. I’m so adding her books to my Christmas wish list!

Hope you get them all!

Yay! The Baby Surprise Jacket…I had forgotten all about that pattern’s existence, but now feel the need to cast on for one…deciding the colors may well take up the rest of the day!

Yes. That was my evil plan all along. Everyone needs a new cast on and then I won’t feel so bad about the number I have.

I wonder how many people who have watched EZ’s videos feel that they are actually related to her? I mean really FEEL that. Lots of people, I’ll bet. It’s strange and wonderful. I know I have thought of her as my Auntie Elizabeth for years.

I think you are right. Lots of people feel that way. I’ve heard of knitters who put on her videos to “have someone to knit with”. She is good company.