I had a ball of Chroma Worsted weight in colorway Dear Diary. I made it into a cowl I called Chromatism. 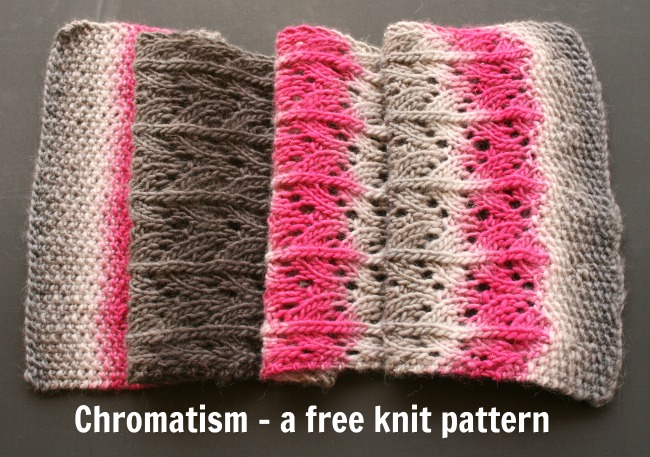 Its a design that I think shows off the Chroma yarn quite well but it will work with any worsted weight yarn. You can grab a copy for yourself right here. I made that ball into a shawlette called Shetland Glory. 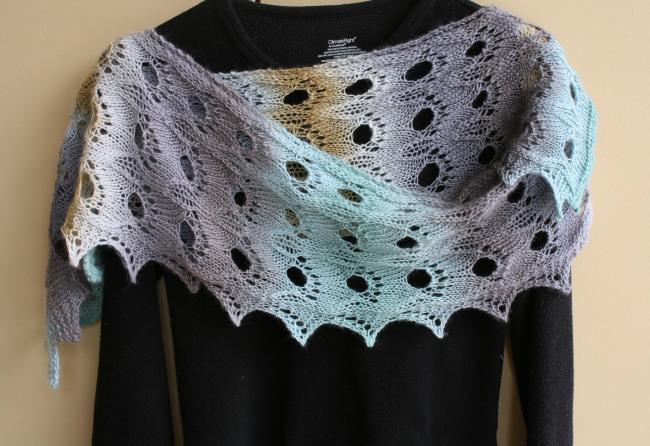 Its a freebie too. Garb your copy of that one right here. into a pair of fingerless gloves. 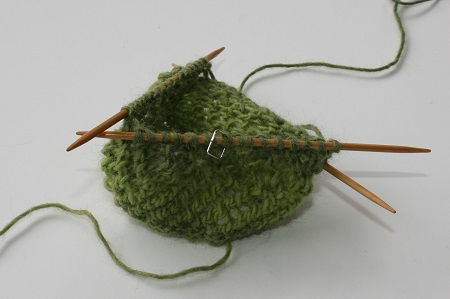 Obviously they aren’t ready for their public debut yet but when they are I’ll have the free pattern here.

As I said, I think I’ve worked with this line of yarn enough to have a few helpful and hopefully intelligent things to say about it. While you never really know if you’re going to like a yarn until you give it a try for yourself, a review never hurts right? Right.

What is Chroma Yarn?

Chroma is a long colorway yarn. That’s a little yarn industry term which means there will be long stretches of one color and before it changes to another color. These yarns are also called self-striping because that is exactly what they do. They add stripes to your project and you don’t have to fuss with changing yarn, cutting yarn, or weaving in ends.

Chroma is made from one ply. By that I mean it is one single strand of yarn. Most long colorway yarns are single ply yarns. The fiber is dyed “in the wool” and then spun into yarn. That’s how they achieve the self striping effect.

Chroma is made from 70% superwash merino and 30% nylon. Nylon gives yarn strength and durability. It will hold up better than a 100% wool yarn if made into socks or mittens or anything that gets hard wear.

I’m an aficionado of long colorway yarns. By definition they are muti-colored which is always a bonus in my eyes. Working with all those changing and shifting colors in one ball of yarn always seems like cheating to me, like I’m getting out of doing the hard work of changing yarns. I do like cheating. So I’ve tried a lot of different long colorway line. I think I like Chroma best. Here is why (A Malabrigo solid is what I picked to go with two colorways of Gina in my Cadence scarf. If I’d realized that Chroma had both the long colorways and a few solids to pick from I would have made that scarf in all Chroma. !!! Sorry, I just had to get that out of my system.)

It does not stand up well to being ripped out and re-worked. Its a soft, and softly spun, single ply yarn. It has a fine halo of fibers that stick out all over the yarn. When you try to pull out a row (or three) those stick-y out fibers grab on to each other. Yeah, this is a yarn that resists ripping. And once you have pulled out your rows, that soft yarn is a little worse for wear. You’ll get two, maybe three tries, to get the stitches looking the way you want them. After that, this yarn is toast. Don’t bother ripping. Its time to cut and start with fresh yarn.

Overall I like Chroma Worsted and Chroma Fingering yarns. I’d recommended them to anyone who wants to play with a long colorway yarn. Also this is a Knit Picks product and their company policy is “If for any reason you are dissatisfied with your order, please contact us within 60 days and we will be happy to process your return or exchange”. (Love that about them and its one of the big reasons I signed up to be an affiliate for Knit Picks.)  So if you do order Chroma and don’t love it like I do, you just send it back.

But you won’t. Its yarn. Very soft, cuddly, colorful yarn.  at that. Who sends that back? Not us.

Shepherd's Wool Yarn – A Review
The Sweater Stone – a product review
I’m Not a Yarn Snob (and I hate being called...

When I purchase, I will help you out by using your affiliates program.

Sales are pretty common at Knit Picks. You shouldn’t have to wait too long.

I love that Virus shawl too. It looks fantastic in gradent yarns.

You commented that Chroma is 70% superwash wool. I have two balls of Chroma in my stash and they say very clearly 70% wool (not superwash) with care instructions to hand wash. This is one reason they are still in my stash. Is this perhaps a change from the way it used to be? If it is now superwash, I’ll commence shopping!

Perhaps it is hand wash because it is single ply?

Okay, I just went to Knit Picks and see that it indeed is superwash now! I guess that’s a commentary on the age of my stash…

Thanks for the review — I never would have noticed the change otherwise!

I just did some searches through de-stash postings and, yes, it seems that the older Chroma was not superwash. But it is now! Lol. I guess they made some improvements.

Great and detailed review. I have been using Chroma for a few years and love the long colorways too- makes very striking garments.

It sure does. I particularly like that every Chroma colorway has at least one thin stripe. It keeps from getting too predictable.

Guest
Carla
Share On TwitterShare On Google
Hi Jenn, I truly appreciate your honesty when writing a review on the various yarns you come across. I to had heard that the chroma yarns were difficult to frog back, but like you, I just had to purchase some. I have yet to use it on a project, but will hopefully get to it soon. I have a question for you, but don’t feel comfortable airing it here. Could you please contact me privately via e-mail? I love your blog and would love to help by providing a donation. Thank you in advance.
Vote Up0Vote Down  Reply

Thanks for the support! No yarn is perfect in all ways. Not yet anyway. lol. And I want my readers who follow my recommendations to know what they are getting.