I made a new friend this week. I did it with the power of my knitting. That’s not surprising at all. Ever since I became happily divorced I’ve gotten much better at making friends and nearly all of that bonding happened over yarn. Yarn, knitting, crochet, spinning… it seems to suck people into my orbit from which they never escape.

So I’ve been hanging out at a certain Starbucks in the mid-mornings. After all the crazy 8am rush is over, I set up with some knitting, some blogging, and plenty of coffee guzzling. One of the barista at this particular shop thinks my knitting is just so cute. She comes over and admires whatever I’m making. She is sweet, she is friendly, she just moved to Texas from France and when her boss isn’t looking, she pours me a free cup of coffee.

Yeah. That is the power of yarn for you. Sometimes it gets you free coffee.

And… my generous, yarn-admiring barista is 7 months pregnant. Personally I don’t think she should be working a job that keeps her on her feet for 8 hours a day but I guess no one worried about that sort of thing anymore. So when she offered to pay me to make a baby sweater for her I instantly said yes. One point three seconds after that I decided I wouldn’t charge her anything for it, partly because I’m a nice person and partly because she gives me free coffee.

Which is how I found myself needing to come up with a cute baby sweater pattern. For that I went to Elizabeth Zimmermann. I’ve made her Baby Surprise Jacket twice and I like that pattern. I was thinking maybe I’d make another. But it never pays to make these important decisions with haste. Picking a baby sweater pattern (that will be worn by said baby from maybe 6 months) is a pretty important decision. So I diligently set myself to browsing through all my Elizabeth Zimmermann books. That’s when I remembered that in Knitter’s Almanac there is a whole month dedicated to baby stuff. Then I realized I’ve never made February Baby (officially known as Baby Sweater on Two Needles). I’m not sure how I have gotten this far in my knitting life and NOT made this sweater. Its a classic. Its been made by over 8,700 ravelry-ers. Its so popular, someone came up with an adult sized version, February Lady.

And I’ve never made one. Huh. Then into my life comes a new friend whose burden seems to be quite a bit heavier than my own and a knit baby sweater is just the thing to make her day. I think I can make that happen. Long cord to grow into? check

I’m all set! And its a little, itty bitty knit. Won’t take me long. I feel like I could have this done in an hour or two. (I always feel that way at the start of a project. My optimism is endless when it comes to yarn.) Knitter’s Almanac is a good book for any knitter’s bookshelf. I recommend it (and yes I do say that about all of Elizabeth Zimmermann’s books.) It has 23 patterns and plenty of EZ’s entertaining digressions. The patterns are two ways: first as an informative, paragraph-style explanation of what you are making and secondly in a traditional row-by-row format. Like all of EZ’s books, they are less about cramming the pages with pretty patterns and more about letting you spend some time with a master knitter.

If you’re interested in the book, here is a round-up of some links with the best deals (I think). 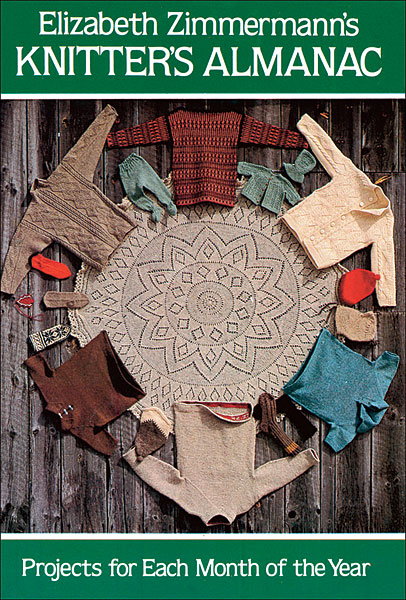 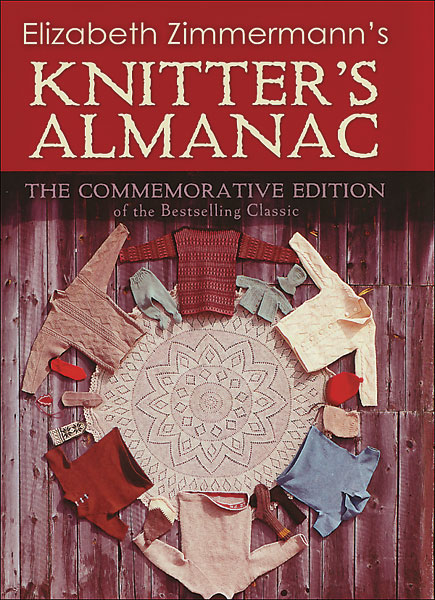 Thank you for the reminder of the Zimmerman books. Now that there are so many patterns in Ravelry and elsewhere on the Web, it’s easy to forget the classics that so many of us began our knitting journey with.

That… is a very good excuse. I’ll use that.

I’m have not made this sweater yet because too many quality patterns are published every month. Those designers keep distracting me!

Thank you, again (and, again). I own all of EZ’s books but somehow missed Lady Febr. which may not have been in the Almanac, at all. Will start it tonight, for me, 1st, and then, a couple of gifts. It’s a plan, anyway. Love – top down, lace and raglan sleeves.

Feb lady is not in the books. Its a modification made by someone else. That is something I feel EZ would have approved of. She wanted us all to un-vent our own knitting!

Same here! There is something about baby stuff. Its feels like every stitch is extra special.

All baby stuff is fun fun fun. So tiny. So cute. I can almost smell the baby smell from here. This should be a fun project for you on more than one way.
Congrats on the new friend.

It is a fun project so far. Making the little arms and the little button holes… its hard not to smile the entire time I work on it.

More years ago than I will admit, a friend said “come to the knitting class on Saturday” I’m left handed, and had tried for years to learn to knit, fruitlessly. I didn’t want to go, but got ganged up on. So I went. The amazing lady who showed up on the back of a motorcycle showed me the basics of continental knitting, and sternly told me to quit thinking I couldn’t knit. Now hubby expects needles in every purse, and ignores the fact that I knit everywhere. I will always be grateful to the great lady of knitting.

Wow! That is a great story. I’m so glad you made that friend and took to knitting!