For someone who has a math and science background I can be awfully hippy-dippy at times. I go at most challenges head-on and with a logical approach. I attack with reason as my weapon. In a situation that requires brain power, I’m firing up that left hemisphere and putting it to work.

Except when it comes to figuring out what a new yarn is good for. Then I’m all about the feels. I sometimes tell people that I’m letting the yarn/roving/fiber speak to me and tell me what it wants to become. You see I live in Austin and Austin prides itself on being a open, arty-farty kind of town so that sort of talk doesn’t even raise an eyebrow. But the truth is when I want to figure out what a new (new to me) yarn is good for I just try stuff at random until I like what I’m making. Its a process that involves a lot of stitching and ripping and swatching and petting of said swatches. Its slow.

This week I sort of got caught up in that cycle of stitching and ripping and swatching and petting. Actually I been through it three times because I had three new (new to me) yarns to play with. These are all yarns made from blends of different fibers and those sort of yarns really set off my hippy-dippy side.

Hey… has anyone else noticed that blends of different fibers are getting more and more popular with yarn companies? Every time I turn around there seems to be some new trendy oh-Jenn-you-have-to-try-this-yarn made with yak and silk and possum and organic hemp or something. I mean its getting ridiculous, right? Those yarn companies are making up new yarns every 15 minutes. How are we ever supposed to try them all???

So I’ve been a bit caught up in finding the quiddity of three new (new to me) yarns. Quiddity is a cool word that no one uses anymore and you probably won’t come across it again in your life (unless you are nerdy bookworm type that is addicted to historical fiction like me). Quiddity is the essence of a thing, the quality that makes a thing the thing that it is, its “whatness”. Admit it, that’s a cool word even if spell checkers are always gripping about it and trying to change it into liquidity. If you’ve ever rejected a yarn as no good for the pattern you are trying to make, then you are all about the quiddity.

A local yarn shop, Hill Country Weavers, has moved into a new location and the shop owner asked me if I would make a Trickery for her, to live in her store, and be a store sample. Then she bribed me with “free” yarn. Technically its not free yarn yarn because I’m not keeping the Trickery. I have to give it to her. But I get to play with the yarn, work with it, knit it all up and that certainly feels like I’m getting free yarn which is why I almost always say “oh sure, be happy to, gimme, gimme that yarn” when asked if I’ll make a store sample. (Also, stores that have examples of my patterns tend to sell more copies of that pattern which is the official reason I do this from time to time. But really its all about the “free” yarn.) But no yarn this fuzzy is for making socks. Fuzzy yarns pill like crazy when you make them into socks. Sure is pretty though. And at $22 a skein for (mostly) alpaca, its a reasonable price.

So I’m working up a Trickery in this new yarn. I started out with a US size 5 needle because that is what the pattern writer, aka me, called for. Pattern writer steered me wrong! In a size 5 this yarn didn’t have any definition. It was loose and messy looking. So I ripped back a whole section … and found that this yarn rips back really easy! It may be a fuzzy yarn but it rips back like its smooth as butter. That was a nice surprise.

Then I re-knitted on a size 4 and everything just came together. If you like the pattern its for sale on ravelry, or any yarn store that does ravelry pattern sales. Also you might want to check out this post, the first in a series I did for a Trickery knit-a-long.

But for some inexplicable reason, playing with Herriot Fine wasn’t enough for me this week. I had to break out the Juniper Moon Farm Yearling. Its a bulky weight wool/cotton blend. I have an innate fondness of wool/cotton blends. It just seems that wool/cotton yarns are so versatile and forgiving. I had an ambitious colorwork, something or other in mind and was swatching away when it was pointed out to me that this yarn has been discontinued and no, I will not be able to get more of it. So I re-calibrated and now it will be a much simpler shawl in a traditional shape that knitters can make in any size they like. Or, you know, until they run out of yarn.

And then I started playing around with some really interesting alpaca-linen-silk stuff. This stuff is weird. The flax, being a plant fiber didn’t take up the dye at all so has the tonal color quality to it on top of the texture quality. I had no idea what this yarn wants to be but that is why I swatch. The side stitches are two-by-two ribbing and now I know that yarn doesn’t like to be ribbing. It has no elasticity. Its all drape. The eyelet work on the left side is done with ssk’s and they look pretty decent. The eyelets on the right are made with k2tog’s and they look crappy. The cable is kind of iffy. Which I why I keep swatching. The seed stitch on the edges is working better that the ribbing did and the cable is improved. I’m closing in on this yarn’s quiddity but I’m not there yet.

As for my own personal quiddity? Its nerd. A sometimes logical, occasionally intuitive, easily distracted nerd who plays with yarn.

13 Comments on "Queries and Quiddity and Yarn"

Most welcome! To inspire a return to an much loved book is certainly a good thing and I’m happy to provide.

Omg, what a beautiful shawl. Love the colors. Will you please share the pattern? Thanx

Which one? If you mean the gray and green, its Trickery. 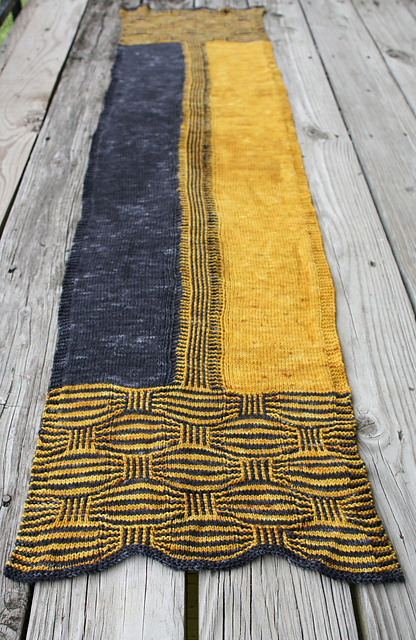 If you mean the purple and red, Its… in progress. lol I have to knit it and then I’ll publish!

Is there a shawl pattern that starts out (and finishes) like the
one you have pictured above? Your beginning is lovely.

That one? Its Trickery. I sell the pattern through ravelry.

You have been very busy this week playing with different patterns. Very nice.

Thanks. Its been very serious play time this week.

Guest
Joan
Share On TwitterShare On Google
I love the word “quiddity”!! I am all about the “feel” and the “look” of the yarn – it will whisper what it wants to be, eventually. You mentioned several things that I find change the nature of a project but one of the biggies for me is the needles themselves. I mostly prefer very sharp “lace” stainless steel needles but on occasion, I have found that I have to go to my Knitter’s Pride Karbonz needles to get the yarn to behave. I have a few wooden DPN’s but find they are too “grabby” for my style of knitting.… Read more »
Vote Up0Vote Down  Reply

And for me so much of it is about the cord. I do need a nice tip but metal/wood doesn’t throw mw off. A twisty, messed up cord will drive me crazy though!