About a zillion years ago I got married and the people in my life were forced to give me presents. I got wine, more wine, lots of towels, and other stuff I can’t really remember. I also go this blanket from my grandmother. Its a king-sized masterpiece of ripple crochet in Red Heart yarn.

I don’t have any of my other wedding presents anymore (I don’t have the husband that they came with either) but I have held on to this. I’ll hold on to this until I’m dead. I’m sure you are all out there nodding vigorously.

My grandmother is a tiny woman, currently in her nineties. She still works, by the way, and no one can make her quit. She is unstoppable. Last winter she went 14 days in a huge ice and snow storm without power while living alone. She took care of herself, she took care of her home (not a single pipe froze), and got herself to the local hospital everyday to visit with my terminally ill cousin. She is tough stuff. I’m telling you, cranking out a a king-size crochet blanket is nothing to her.

But its something to me.

Grandmother does not like “good” yarn. I’ve sent her some. I sent her handspun that I made just for her. Nope. She likes Red Heart. And not the newer lines of yarn they put out. She wants the real stuff. Its all she works with.

There must be many, many gracefully aging master crocheters out there who feel the same way about that Red Heart. I’m not the only one with a treasured family heirloom made with yarn that costs (in today’s prices) about 18 cents an ounce. I know that because people have brought me their old Red Heart blankets and paid me to repair them. More than once I’ve been handed a Red Heart wonder in a riot of colors that was made decades ago by someone’s mom/grandmom/aunt/godmother. The current owner is desperate because a dog chewed on the blanket, or a foolishly helpful person tried to wash it, or a baby took a pair of scissors to it or something. The owner begs me to fix it and I agree but I tell them that I’ll have to charge them. Mending is not an easy thing to do. They always answer:

“That’s okay. Whatever its costs is fine. Just, please, fix it!”

And so they pay more than the cost of the materials for the whole thing just to see it fixed up. Ridiculous right? But we get it. You and me, we totally get it. The cost of the yarn that goes into a project is not what matters. Its the love. (There is more vigorous nodding happening isn’t there?)

Have you ever made an heirloom worthy piece for someone? And if so, do you think that in 30 years they’ll be paying a smart-ass like me to mend it for them so it can get passed on to the next generation?

PS. I’m fine. I’ve had phone calls and some emails and lots of text messages asking if I was caught up in the floods that raged all over Texas yesterday so I figured I’d just throw it out here on the blog. I’m okay. Lots of people have lost their homes and their cars. A few lost their lives. The worst of it hit south of me.  I’m one of the lucky ones.

20 Comments on "An Heirloom in Red Heart"

Omg, you prompted me to turn on the t.v. – How terrible! I’m glad to hear the worst missed you.

I didn’t knit or crochet when I had my daughter. Years later, when she said she wished she had a hand-made baby blanket, I made her this one. She agreed that it was better late than never, and I hope it will become an heirloom. 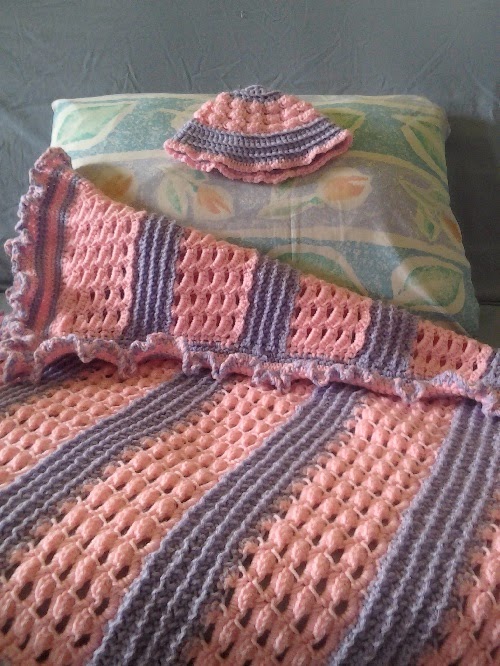 P.S. Your grandma is awesome!

Yes the flooding was bad. Those poor people. My heart goes out to them.

So your daughter demanded her baby blanket after she was all grown up, huh? GOOD. I could make a bunch of mushy comments about how she will always be your baby and how you’ll remember her as a little helpless thing no matter how competent she becomes. But I won’t. I’ll just say more power to her and wait for you to tell us about how she is now demanding her obligatory Disney Princess birthday party at the age of… oh say…. 32.

Lol, we’ll see… She’s currently in to Minecraft and mud, so that would be a turn-around!

You do lovely work Jenny.

I’m thankful to hear that you came thru The Big Texas Flood of ’15!
I kinda expected today’s post to be titled Spinning in Hip Waders!
More power to your Granny. She sounds like a ring tailed tooter! God doesn’t make people as tough as He used too, seems like. I know that compared to the older ladies I know that I’m a weak sister.

My Granny is all that and more. Grown men have been known to fear her! lol

I’m so glad that you weren’t caught up in the floods. I’ve never made someone a heirloom-quality item (except for maybe a quilt or two), but I do have a crochet tablecloth that is a masterpiece that came to me from a great-aunt. I take good care of it and will pass it down to a niece eventually. It is made of cheap cotton, and it priceless.

That sounds like a true family heirloom to me. Those cheap yarn/priceless pieces have a charm all of their own!

What an amazing blanket! I hope my sister will feel like that about the wedding blanket I made for her. ☺

I’m sure she will! Your love and care is worked into every stitch and that is the real gift. Oh yes, I believe those special pieces made for a special someone are full of magic.

That blanket is gorgeous! I know what I’m going to do when I shrink my list of projects a bit. 🙂

Oh! So Granny’s blanket has been an inspiration? That’s wonderful!

I’m actually currently making a crochet square blanket for my best friend, but I’ve never done a blanket not in that way. I’ll probably do it when I’m back at school, since it’s something I can work on as I have time (and my summer project list is currently a mile long).

My summer to-do list is like that: Too long, full of dreams, and bound to last me until Christmas. By which time it will be even longer.