My cell phone died this week. It died a natural death, one of old age, and I’m a bit proud of that. You see I “accidentally” washed my previous two cell phones. They did not die naturally at the ripe old (electronic) age of 2 years or so. They died when I left them in my jeans and ran the phone (and the jeans) through the wash. The first time I did this I honestly thought it was an accident; a careless mistake. The second time it happened, not quite a year later, I realized I was expressing my resentment at all cell phones by murdering them on laundry day.

But not my last one. That phone died from being dropped on asphalt about 400 times. Also from a battery that just wouldn’t hold a charge anymore. I managed to keep my cell phone murderous impulses under control for two whole years. Yay me. But it was time to get a new cell phone and if there is one thing I hate more than my phone its having to spend money to replace it.

How much money? Ahh! I’m so glad you asked because that leads me (finally) to the subject of this post. I did not spend much at all. $79.99 to be exact. That got me this Galaxy Core prime thingy. (By a sheer not-at-all-coincidence my last phone, the one that died naturally, cost me $79.99 as well. It was some basic touch screen LG model. That’s where I am in the cell phone market, about eighty bucks.)

In my torturous mission to purchase, and set up, my new cell phone I have come to realize just how much you people are paying for those new model iPhones. Unbelievable. You really paid $600 to $700 for a freaking phone? Do you know what you can buy with $600 to $700? That is my Louet S10 wheel. It currently will run you between $662 and $761 depending on which features you get. Its quite the nice “starter” wheel and by starter I mean you will be using for the rest of your life.

But that isn’t your only option. Most “starter” wheels for starting handspinners are right in that same price range, like The Minstrel, a beautiful castle-style wheel by Kromskis. 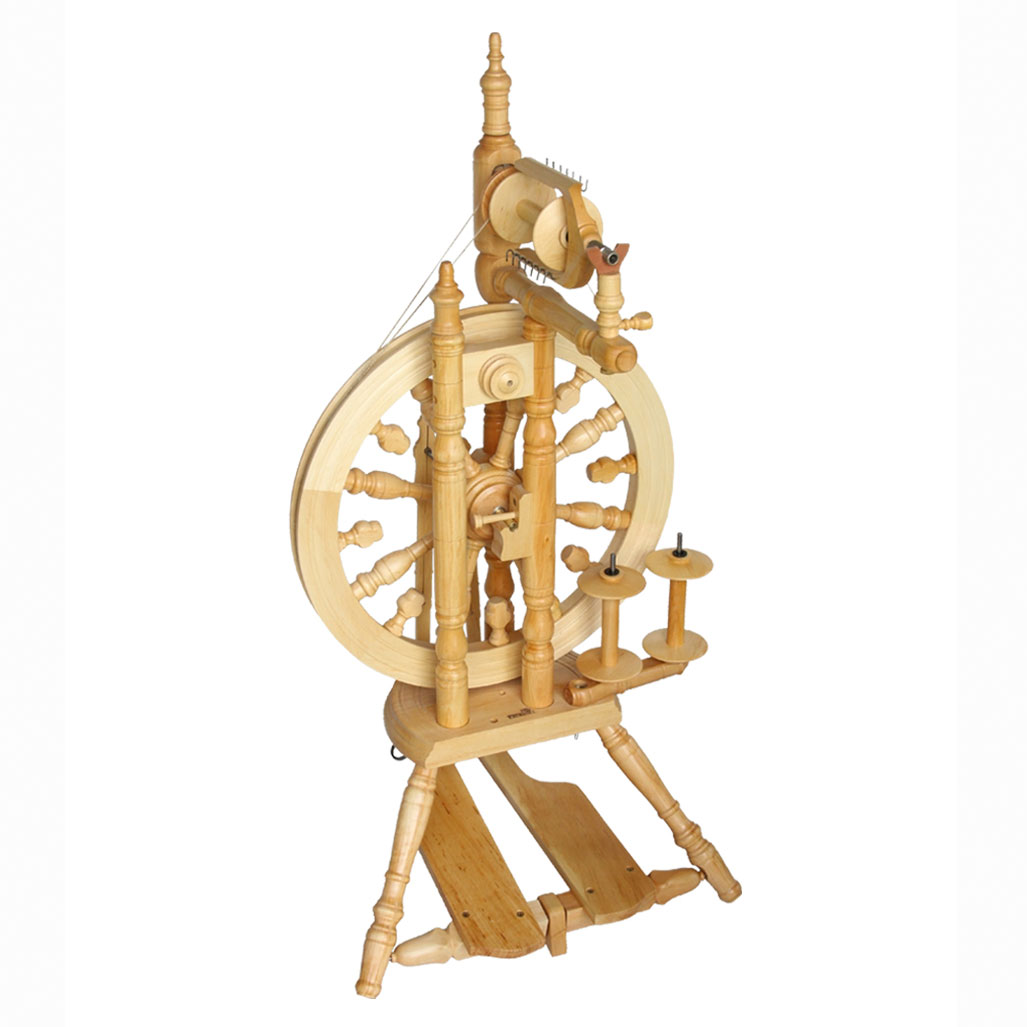 Now admit it, that’s gorgeous. An instant heirloom. And it does more than look pretty. It makes yarn. Here are all the reasons why a spinning wheel is a better purchase than a iPhone: I’m telling you, the next time your phone dies go get a cheapie phone from Walmart and use the cash you saved to buy a spinning wheel. A wheel will be come a treasured friend, a centerpiece of your living room and in your crafting life. And you will never, ever, accidentally/on purpose run it through the washing machine.

Question: Do you talk to your wheel in public?
Cuz years ago, people who walked around in public talking out Loud! were look at askance and avoided. Now they are everywhere and many of them have no visible phone. Startles me when a conversation resumes behind me and makes zero sense to me.
You, at least, show that you have priories. Sensible ones at that.

I do not talk to my wheel. Not out loud at any rate, lol.

yes I too am frequently startled by people talking to the bug-like thing in their ear. How they can discuss their personal lives in public like that is beyond me. I guess some people don’t even want their privacy?

Guest
quinn
Share On TwitterShare On Google
My current cellphone is the costliest so far at $50. and although it does more stuff – like email – than my old $30 phone and the $15 phone before it, it is about useless AS a phone…the cheaper ones always got an adequate signal from home, and this “fancy” one doesn’t! And that’s after spending over 2 hours getting Tracfone to transfer my unused minutes from the previous phone to this one. Ugh. I really need to get my landline fixed – it’s working for my internet but there’s so much static on the line no one can on… Read more »
Vote Up1Vote Down  Reply

Phones are nothing but a pain. Why don’t more people see that? Its a leash when its working properly and a chore when its not.

You are just encouraging my phone-resentment.

a phone is a phone, not an entertainment device, not a camera, not a computer… Too bad they don’t come with a book of phone manners attached!

Phone manners should be included with those little manuals that come with the phone.

People treat their phones as if they were toys, which is fine except… then all you do is play with your toy. And miss out on being alive.

My cellphone is a flip phone. Yes, really. I next to never use it. I don’t even know what its phone number is. I am so sick of watching people who’re glued to their cellphones or being forced to listen to them bellowing into them. I am an eternally beginning spindle spinner–cos I never practice enough–but I’m on the waiting list for an e-spinner. Looking forward to getting it. And I haven’t even dropped my flip phone. Yet!

I miss my flip phone. My friends all thought it couldn’t get text messages (it could) and so they didn’t bother to text me. The day I got a swipe screen phone, the text’s started rolling in. Sigh.

An e-spinner huh? Wowzer. You’ll be cranking out yarn so fast you won’t know what to do with it all!

AMEN to that good thinking !!! I do not have a cell phone, and do not want one either. I think you have hit on a very good idea, to advise people to spin yarn, instead of chatting about ones every move, on a phone. I guess it makes people feel important, to be getting calls all of the time. Spinning is a MUCH better idea !!! Well heck…think about it… if more people spun yarn, maybe the price of yarn would go down !!!! I like the way you think Jenn ! Happy Sunday all.

Spinning is just as addictive as playing on one’s phone. But with spinning you have something to show for your efforts!

I was just hoping to put an idea out there. Try to change a few minds. I honestly do think money spent on a wheel is money well spent.