If you’re not burnt out on all things vintage I have an author for you that you might enjoy. Georgette Heyer published her first novel in 1921 and her last in 1975 (after her death) and she is credited as the founder of the Regency Romance. Her books are chock full of accurate historical details. More importantly, her books are fun. 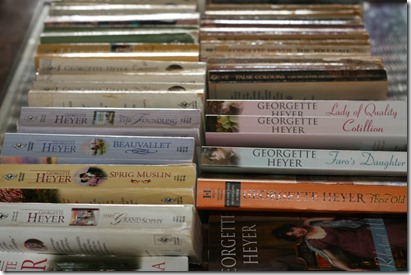 Heyer is my favorite author of all time, all genres. I discovered her on my mother’s bookshelf as kid and I still read her stuff. At this point of course, I’m re-reading her books (for the zillionth time) and they are like old friends. According to wikipedia she wrote 56 novels and looking over that list I can find only one I haven’t read (The Great Roxhythe).

I started my Heyer collection by stealing some from Mom. She still complains about that. Then I started buying my own copies. Now I’m buying them all again for my Nook. Some of these titles, I have three copes of.

Heyer is  best known for her regency stuff and lots of the modern romance writers rip off her style and her plots (In her own lifetime she was plagued by plagiarists).  But her books cover other time periods too. The earliest, I think, is an account of William the Conqueror and the most modern is, well, all of the thriller/mysteries that she wrote.

For her fans, Heyer wrote her books with humor and wit. The characters are often funny, often foolish. In her stories you will sometimes find:

For herself, Heyer wrote with historical accuracy. She is often compared to Jane Austin. But, unlike Austin, Heyer wrote stories that took place 100+ years ago or more. She couldn’t assume that her audience was familiar with the setting and times of when her story took place; she had to add historical details. She does that really, really well and this is why I’m recc’ing her during Vintage Week. As you are reading some light hearted tale about a clueless young bride who thinks she in is a marriage of convenience when in reality her husband is head-over-heels in love with her (and feeling very frustrated), you will learn:

There are details galore. When you read a Heyer novel you are in the world. Its like a movie.

One more thing about these romances, they are romantic not sexy. There are no sex scenes. These stories are about two people falling in love with each other while you, the reader, fall in love with them. My mother let me read these when I was a kid! There are no naughty parts.

Two of her books actually have been made into movies. The Reluctant Widow movie is pretty terrible. The Hollywood types tried to make it thrilling and suspenseful. They made the heroine French and desperate. The book its based on is about an impoverished English woman trying to earn a living as a governess when she finds herself in possession of a falling down house. This house comes with a idiotic young man, his wretched dog, and a pack of Neopolean spies, most of which are pretty incompetent at being spies. There is a handsome man to fall in love with and he he should be the macho recusing type. Mostly he is practical and kind of bossy. Why Hollywood thought this would make a good thriller is beyond me. (The second movie made from a Heyer book is Bezaubernde Arabella. Its in German. I haven’t watched it but I betcha it’s a stinker too.)

So.. if you want to get to know Georgette Heyer, you have to read her books. Here are three you might try first:

These Old Shades – it’s the BEST. It takes place in Georgian time (not Victorian) when the bad guys are bad and the good guys are… also kind of bad. The setting moves around from France to England and then back to France. The hero is wicked and sexy and wicked. Did I mention wicked? He is. I think the only actor who could have played Justin Alastair is John Malkovich. To match that, the heroine is the sassiest, most indomitable, spunkiest girl who really and truly does not care what anyone else thinks. She gets what she wants and everyone thinks its adorable.

Cotillion – I love this one because Freddy, the hero, is such a idiot who still, STILL, manages to save the day. He is charming as hell.

The Talisman Ring – Everyone in this book is having fun, having a grand adventure (including the bad guy) expect for Sir Tristan. Sir Tristan has to put up with all of them and all their nonsense while solving the mystery, restoring the rightful heir, and winning his lady. And his lady teases him mercilessly throughout. That’s why he falls in love with her.

Next time you a looking around for a good read try out one of these. They are quick, easy, and full of all kinds of vintage-y goodness. Who wouldn’t like that?

And while you are reading some Heyer, I’ll be playing around in all the Revive-A-Vintage entries. Winners get announced tomorrow! I can’t wait! I think I’m having more fun picking winners then ya’ll will be at winning.

I love book recommendations! In return of your wonderful recommendations I recommend…. *thinks about it* The Abhorsen Series by Garth Nix. I have been reading them since middle school and I love each one. They are fantasy and have a great deal of magic in them. The world was created by Nix and it is one of the most detailed fantasy worlds I have ever read. Also no naughty bits, though if you like books with those parts I have a ton I could recommend, I was just trying to keep in theme 🙂 Happy reading!

A theme! I love themes!

Okay. Note to all: Get our your book recs! Let’s have the best of what’s on your shelves. 🙂

I found one her books on project Gutenberg (The Black Moth) and will check it out, as soon as I’ve finished my current read.

About the German movie – compared to todays standards it’s probably rather meh, but nearly 60 years ago that were some quite well respected German actors and the director is rather well known for fun and lighthearted movies. Should be a good fit and maybe a good movie for a rainy autumn afternoon.

The Black Moth is a good one. 🙂

and let me know if the German Arabella is any good, please!

I’ll have to check, where I can find the movie first. Could be a while until that happens. But I’ll let you know.

The Black Moth is good but not truly representative of the body of her work.
But any start to Heyer will have you hook.
I feel for Jenn’s mom. I discovered Heyer in the 70’s when most of her work was out of print. The books came slowly and took many enjoyable hours scouring used book stores. Not many people turned in their copies and once you start you will understand why.

I did not read a lot of books in English but I loved The Tea Rose. The text was easily understandable and the story takes place in England around 1900.

Are yours “easy to read”? I mean for a non native speaker?

Hmmm, That’s hard for me to judge. since the characters peak as they would have back in that time period, its can be tough for a modern English speaker/reader to get into the rhythm of it. Language changes do much. But the vocabulary is not advanced at all. Its all very conversational.

I love Georgette Heyer. I’ve been delinquent in reading the posts, but when I saw this one, I had to read it. I don’t know if I’ve read all of them, but your comments captured the books. The silly young men and the dog. I can recommend another author similar to Miss Heyer–Patricia Veryan. They may have a little more romance than Heyer, but they have spies.

Thanks you. I’ll be looking for her.

I’ll have to check her out. Thanks for the rec!

My mom loves Georgette Heyer. I wonder if she still has her books. Now that my daughter is getting older and I am starting to read “adult” books (vs the toddler/preK kind), these books sound like something I’d enjoy

I bet your mom still has them. They were so hard to find for so long (in the 70s & 80s) that most fans hold on to every copy they own. Just in case they go out of print again. Like me, lol. That’s why I have multiple copies of some titles.

I hope you get to read a few and I hope you enjoy them as much as I do!